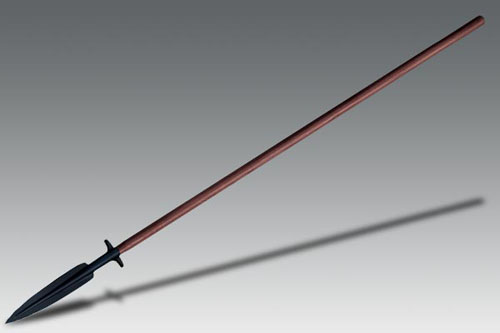 The Cold Steel Boar Spear struck a decisive blow for personal defense recently when it was used to successfully defend the life of a Vancouver woman who was being mauled by a cougar!

Cold Steel HQ was inundated with emails following the release of this dramatic story.

News sources report that the 60 year old woman was attacked by the predator outside her remote cabin in British Columbia, suffering severe injuries to her face and head. However, it was the quick actions of her common-law partner that saved her from a grisly death.

Reacting swiftly to the screams of his wife, the unidentified man jumped to her defense and stabbed the cougar with his Cold Steel Boar Spear.

The body of the big cat was recovered shortly afterwards by Conservation Officers and their specially trained tracking dogs. The beast had fled barely 20 meters from the scene before expiring from its injuries.

Conservation Officer, Sgt. Ben York praised the man’s quick actions. He said: “I’m pretty sure that this is the first time in British Columbia, if not Canada and maybe even North America, where someone has stopped an attack by a cougar with a spear and killed it with a spear”.

Describing this unprecedented act of courage, Sgt. York stated: “I understand why he did it, but it still takes a lot of bravery to do what he did and I’m glad he was there to rescue her. You know it could have turned out a lot differently if he hadn’t been around”.

In an email to Cold Steel, he went on to add: “I can confirm that the spear used in defense during the recent cougar attack on Flores Island, BC was a commercially obtained Cold Steel Boar Spear. The spear was used by the victim’s common-law partner to drive the cougar off of her. The cougar was found dead nearby by the responding Conservation Officers and a necropsy of the cougar by the Provincial Wildlife Veterinarian confirmed the cougar died from the spear wounds it received”.

Info about the spear:

For 200 years, the boar spear reigned supreme as the staff weapon of choice in the forests and often the battlefield as well. Only the invention of a reliable firearms in the 18th century could fade its renown. it would have disappeared altogether if not for the decadent tastes of the Northern European nobility. To them, hunting with a firearm was a pale substitute for the thrill of hand to hand combat in the forest with nothing but a spear.

You too can enjoy the same excitement with Cold Steel’s® modern recreation of this classic spear. Cold forged out of medium carbon SK-5 steel and heat treated to a spring temper, the massive blade is designed to flex under stress instead of breaking.

It’s sharpened with a good utility edge and features a sturdy reinforcing rib to make it as stiff as possible for maximum penetration. The Boar Spear comes complete with a stout premium ash shaft and a Secure-Ex® Sheath.