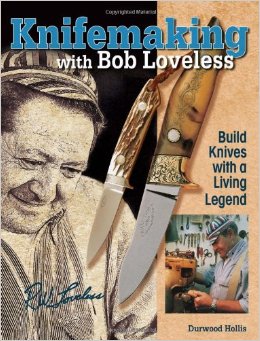 Review of the book, “Knifemaking with Bob Loveless” by Durwood Hollis

I think it would be difficult to find a knife maker, knife collector or anyone who is interested in knives (especially custom hunting knives) that hasn’t heard of Bob Loveless. If you find a knife maker who hasn’t heard of R.W. Loveless I might be a bit skeptical. Cutlery Hall of Famer, father of the modern custom knife movement, the guy who popularized the dropped point skinner and more make up the legend of Bob Loveless. I mean the guy started making knives in the early 50’s when the only other person really making knives was Bo Randall. It’s always like that, the guys who were doing it first are always the legends in any certain field and rightfully so.

Anyhow, I’ve read just about book there is on knife making and I finally made my way to this one. Most knife making books are extremely dry and boring. They go over the same systems and methods every other book does and there’s lots of repitition. Also, they typically tell you how to make a knife with extremely primitive tools so the average guy can make a knife in his garage with a file, drill press, hammer, a bar of steel and whatever else that is probably already in a DIYer’s garage. This book is no exception, except it tells you how Bob made his knives. Which is insightful and more entertaining.

The first part of the book was most interesting to me as it detailed Bob’s early life, how he got started in knife making and his overall theory on knife making. At this point in my knife making it is theory that most interests me. The “why” behind certain methods instead of the method itself. The interview portion of the book revealed some true nuggets of wisdom that I’ve already begun to employ in my everyday knife making routine. I have a lot more respect for Bob Loveless after reading this book. He’s dead know as he died Sept. 2, 2010, but seemed like a really cool guy.

Here are some of the quotes I liked most from the book:

On forging vs stock removal (still a huge debate going on about this today): “No matter what the forging community believes, you can’t improve a piece of steel by heating and beating on it.” – Bob Loveless

On his extremely simple style of knife design: “When a knife is used in field-dressing or skinning, all of the initial cuts are made with the cutting edge positioned upward. this means that the knife is actually held upside-down. In that postion, finger grooves serve no purpose and actually get in the way of the secure grip.” – Bob Loveless

“My knives are everything a knife should be, and nothing else.” -Bob Loveless

On knives that are advertised as easy to sharpen, but also hold their edge for ever: ” The truth of matter is that edge holding and sharpening ease are at the opposite ends of the spectrum. A knife cannot possess both characteristics at the same time.” -Bob Loveless

On his work in general: “Looking over my body of work, I see lot of mistakes. the good thing about knife making is you can always correct a mistake with the next knife.” – Bob Loveless

And there’s plenty of these peppered throughout the book. There’s also lots of high quality color photos of his knives that let’s you inspect the detail of his knives. I’ve never seen a Bob Loveless knife, but I hope I do one day. I’d like to hold one. They’ve sold for $250,000 and the price isn’t going down on his knives, so it’s unlikely someone is going to just hand over a knife like that and let me fiddle with it.

Overall, this was a refreshing read from the other knife books I’ve read. I’m also fairly certain I’ll be using this as a reference point down the road as well. Good one for the shelves if you plan on making any style of custom knife.

You can order the book off of Amazon here.