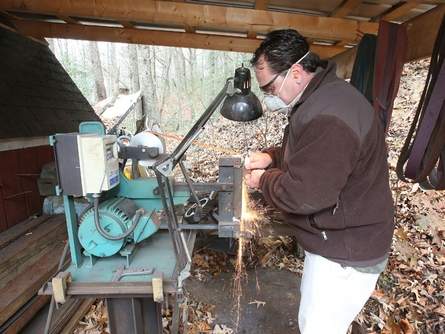 How A.G. Russell changed a man into a knife maker.
by R. Bindewald

As a kid, Danny Robinson would flip through the pages of the A. G. Russell Knives catalogue, wishing his parents would buy him a knife of his own. Today, the knives he crafts by hand at his Arden home are sold in the same catalog.

Robinson credits his early love of knives to watching Tarzan on TV.

“Life is good for this guy, but the one thing he cannot live without in that jungle and it had to come from somewhere else was that knife,” Robinson said. “You can have nothing, but if you got a knife you can have family, friends, jungle life — you’ve got it, and that’s what it was for me.”

In 2012, Robinson was selling his utility knives at the Blade Show and International Cutlery Fair in Atlanta when A. G. Russell himself stopped by his table. Robinson said Russell picked up one of his “Lil’ Pig” knives and just said, ‘that’s cute.’”

Russell then told Robinson that if he would make one adjustment to the knives, he would buy 100 of them and sell them in his catalogue.

The knives are named “Lil’ Pigs” because they are, as Robinson said, “short and cute with a curly tail.”

All of Robinson’s knives are made from discarded farrier files. One side of the file is used for filing horses’ hovves, and the other side is for the horse shoe.

Robinson said he approached his friend, Wayne Hendrix, who makes knives, and asked him to create a knife that Robinson designed, so he could sell them for Hendrix.

“He pushed my picture back to me and said, ‘Nope, I am not gonna do it,’” Robinson said. “He said, ‘You’ve got a grinder in your garage and you’ve forgotten more than I have ever known about knives. You go to your shop and you start playing with it.’”