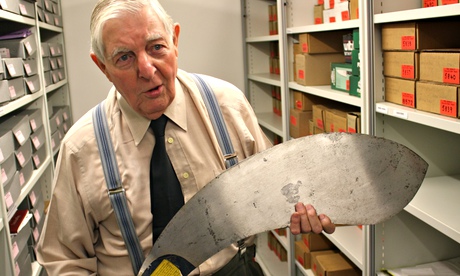 Ken Hawley, who has died aged 87, was one of Sheffield’s foremost industrial historians, a former tool salesman whose inquiring mind, formidable drive and eye for an opportunity led him to assemble a collection of international importance. The Hawley Collection, comprising more than 70,000 tools from Sheffield together with complementary material from elsewhere in Britain and around the world, includes 2,000 joiner’s planes, 1,000 table knives, 260 micrometers, 50 anvils, 4,000 catalogues and thousands of associated documents. Having been housed for many years in a large shed in Ken’s garden, it now has its own permanent display space in the city’s Kelham Island Museum, and is widely recognised as one of the best places to learn about tools and tool-making anywhere in the world.

The collection had its genesis in 1950, when Ken went to demonstrate an electric planing machine to a client in his workshop. “I saw a joiner’s brace on the wall, and thought: that’s an unusual pattern that I haven’t seen before,” he recalled in a filmed interview for the collection’s website. “It was the first tool that I acquired, and it set me off. I had never taken the slightest bit of interest in anything historical, but that was it.”