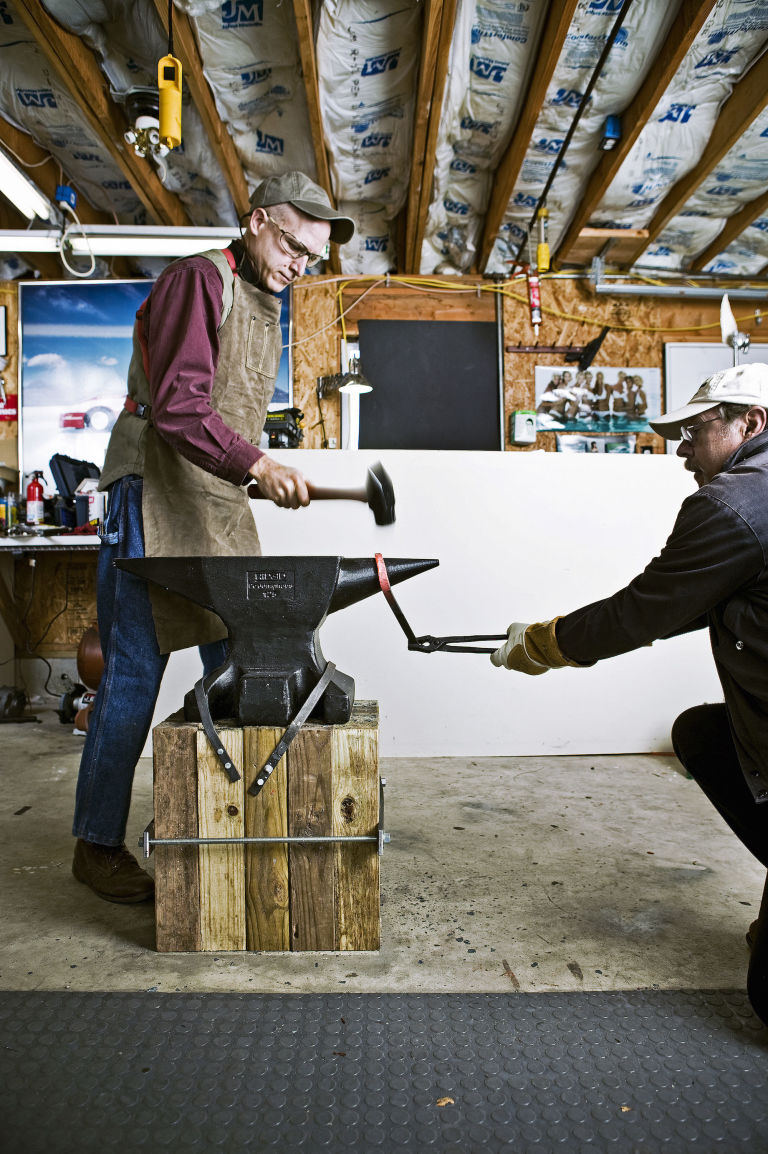 If you want to work with metal, there’s one thing you have to confront: You need heat. With it, you can make the toughest metal submit to your will. Without it, you’ll never gain full mastery over this stubborn material.

Maybe it’s because our smokestack industries are in decline that a rising number of Americans feel the need to get their metalworking fix in home workshops. The Artist-Blacksmith’s Association of North America counts a membership of 4000 hobbyists and professionals. Some people estimate there are more blacksmiths in this country today than there were during the 1800s. And you don’t have to poke around long to find dozens of Web sites offering friendly–even passionate–advice from artisans, along with equipment ranging from anvils and tongs to air-driven power hammers.

First, I needed a forge. I considered buying a gas-powered model, but the fact was that I wanted to build my own. So I settled on a design that can be executed in an afternoon using parts purchased at a home center, a masonry supply yard and an auto parts store. The forge would burn coal, rather than gas, to make things simpler. And the design had another virtue, at least as far as I was concerned. It was based on plans published in Popular Mechanics in July 1941.

I enlisted the help of Mike Allen, our senior auto editor and a crack metalworker. He glanced at the old plans and said, “Sure, we can build this.” Within days, Mike’s house and the shop behind it swirled with activity as the UPS guy delivered in rapid succession a 275-pound anvil, tools, materials and four 50-pound boxes of blacksmith’s coal shipped from Pennsylvania.

Once the supplies were in, we set to work building the forge, beginning with its stand. I cut steel parts and handed them off to Mike, who laid them out on the shop floor, clamped them together and temporarily tack-welded them with small globs of steel.

With the stand tacked, he flipped up his mask and handed me the welding gun: “You take it from here.” I slid on a mask and picked up where he’d left off. As I worked, Mike crouched over my shoulder and fired off bits of advice. “Get more weld metal on the vertical surfaces,” he said. “You’re getting too much spatter; reduce your travel speed and your electrode stick-out.” When I found it difficult to see through the welding glare and smoke, he said, “Deal with it. Look at the weld puddle, not the arc.” I learned more about welding in that half hour than I had in years of fooling around on my own.

After we com­pleted the stand, we riveted sheetmetal into a hood and fashioned a chimney from a 5-ft piece of stovepipe. Then, we troweled refractory cement (the kind used in furnaces and kilns) into the sink. We ran steel and PVC pipe from the drain to the output port on a shop vacuum. The same line would supply air both to the sink (to feed the fire) and, through a Y joint, to another pipe leading into the chimney (to help pull the smoke up and away). We installed a valve to let us direct the air where we wanted it. We also cut pressure-treated 4 x 4 lumber to make a block for the anvil, then hoisted the anvil onto the block using a tow strap hooked to a ceiling-mounted electric winch. Finally, we hammered 1/8-in.-thick steel flat stock into straps to attach the anvil to its block. Believe me, 15 minutes spent pounding cold steel can convince anybody of the need for a forge.
Read the entire article here.