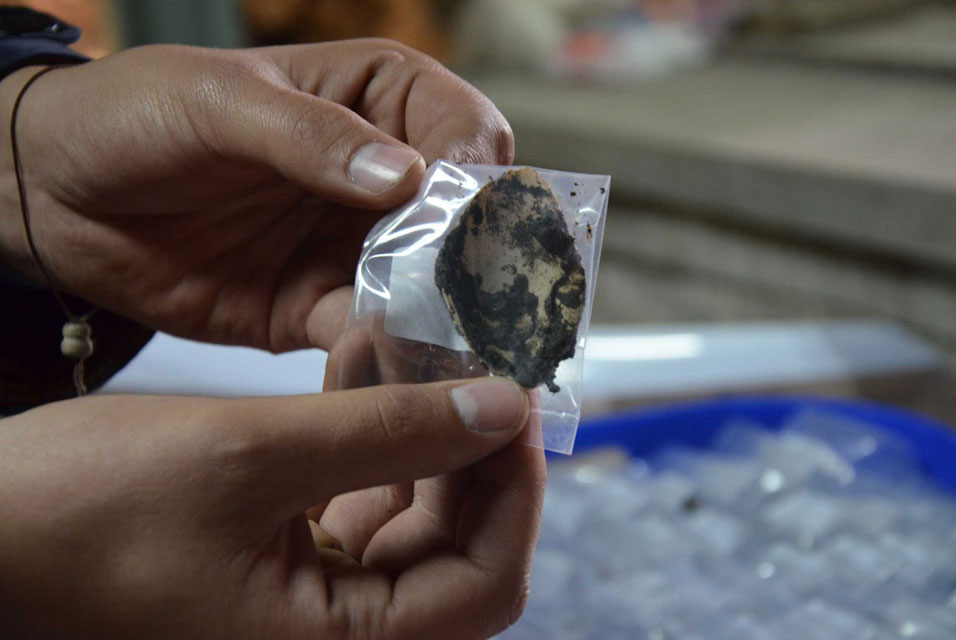 MEXICO CITY – A vase in the form of Tlaloc (Mexica god of rain), hundreds of shells and snail shells, as well as 28 flint knives adorned as warriors which date back 500 years, were recovered recently by archaeologists of the National Institute of Anthropology and History (INAH) in the property of the entailed estate of Nava Chavez, in the Archaeological Zone of the Great Temple. The afore mentioned materials integrate Offering 137, which specialists from the Great Temple Project (PTM), directed by archaeologist Leonardo Lopez Lujan, have excavated since April to recover them. “The archeological objects where found inside a box like structure made of stone, and under three slabs of volcanic rock, leveled with a floor made in the VI construction stage of the Great Temple (1486-1502 AD). When these were removed they found a sculpture –21 centimeters [8.26 inches] tall and 11.5 [4.52 inches] centimeters wide– that represent the god Tlaloc, and which possesses the remains of a blue pigment on its surface”, detailed Diego Matadamas Gomora, one of the archaeologists involved in the excavation. “Underneath the piece —he added— they found nearly 800 shells and snail shells; as well as a copal figure covered with lime that represents a deity of fertility unidentified as of yet; web corals and osseous remains of a balloon fish. All of these, being aquatic materials, represented the underworld, one of the levels of cosmos that was found below the earth (according to Mexica thinking).” The archaeologist said that below said marine materials, they found 28 flint knives, which might have represented adorned warriors according to the artifacts they are decorated with; 27 of these are made with white flint and just one —found at the center of the box— is brown, all of which were placed pointing towards the Great Temple. Archaeologists Alejandra Aguirre and Angel Gonzalez consider them representations of warriors of the underworld. “This came mean that flint knives —found in other offerings, which had just been seen as sacrificial knives up till now—, could have personified warriors or deities, which could change the symbolism that we had of said oblations, many of which have been found since 1978 during the first season of excavations in the Great Temple Project”.